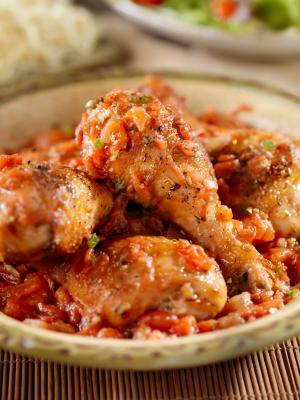 The basic principles of braising are a combination of searing or browning and then simmering.  This process accomplishes two things: it cooks the meat, and it produces a sauce.

Following are some basic procedures that apply to most popular braised meats and will assist with the quality of the finished product.

The meat may be seasoned before browning, or it may receive its seasoning from the cooking liquid while braising.  But remember that salt on the surface of meat retards browning.  Also, herbs may burn in the searing process.  We recommend adding seasoning to seared meat prior to simmering.

Dry the meat thoroughly before browning. In general, red meats are well browned; white meats are browned less heavily, usually until they are golden.

The amount of liquid to be added depends on the type of preparation and on the amount of sauce required for serving.  Do not use more liquid than necessary, or the flavors will be less rich and less concentrated.

Pot roasts usually require about 2 ounces (60 mL) sauce per portion, and this determines the amount of liquid needed.  The size of the braising pan used should allow the liquid to cover the meat by one-third to two-thirds.

Some items are braised with no added liquid.  They are browned, then covered, and the item cooks in its own moisture, which is trapped in by the pan lid.  Pork chops are frequently cooked in this way.  If roasted, sautéed, or pan-fried items are covered during cooking, they become, in effect, braised items.

If the first method is used, the vegetables should be added just long enough before the end of cooking for them to be cooked through but not overcooked.

Braising liquids may be thickened by a roux either before cooking (Method 2) or after cooking (Method 1). In some preparations, the liquid is left unthickened or is naturally thick, such as tomato sauce.

Become a member to rate, review and save your favorite Saladmaster recipes!